It seems like just yesterday I put out an ad for someone to organize opposition against my FAS team. We spent weeks hashing out the details and finally got to play - for a mere 17 turns. FAS 403 ended with our complete victory in a very abbreviated game.

My team hasn’t had enough yet. So once again I’m calling for someone(s) to take on my FAS team. We can discuss and compromise on Variants, setups, and starting conditions.

Are there enough players out there with FAS experience to organize a team to “take us on” ??

I’m ready to go. We can even get started by the first week in March if your team is up for it.
Clint was sending you my contact info so we can discuss the setup

Thanks for your efforts to provide my team with new opponents.

John is interested in ‘taking on’ my team but intends to be a team of one, playing all 12 nations whereas I currently have 9 committed players and two others that we’re awaiting a reply from. After discussions with my team, we would prefer to play against a team of players.

For our last game, we flatly refused a similar offer (a one-player team) preferring to wait until we found opposition. Unfortunately, that took another 6 months until we accepted Jim Sparkes’ challenge of a 6-player team. Most of my team are anxious to start another game and do not want to wait that long again.

As the Greybeards team captain, I propose that the two of you attempt to assemble a team, under John’s leadership, of at least 6 players. If this is not possible ( after a month or 6 weeks) then my team will accept John’s challenge.

Is this acceptable to you John?
If so, can you help him find allies Clint?

After that’s settled, and so everyone involved has a voice, we intend to spend another week hashing out the map and Variants.

your thoughts and comments are welcome,
Scott

With no responses to my call for opposition, my awesome team will accept John’s 1-man team as our next victim.
Thanks for any other unknown consideration by the MEG community.
S

The map is:
John is Red and FP
Scott is Blue and DS 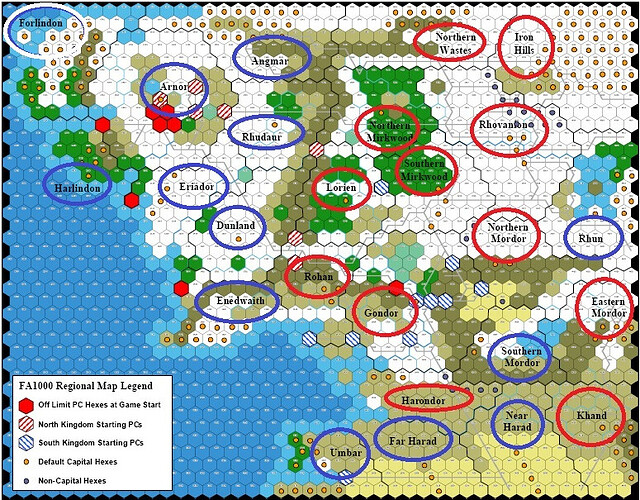 Can’t wait to see how this runs out… I’ve got my money down already btw!

Wots that white circle in Forlindon?

The white region, Forlindon, is where the anticipated landing of the Valar will take place. My team has prepared this region to allow all the Valar and Maiar to bow down in submission to my Greybeards Team.

Actually, the white circle is part of the Seldon plan.

It represents a white flag and is strategically placed next to the blue regions
in case the Greybeards run out of other options.