Somone asked a while how the Sauron challenged looked like, well I decided to challenge Sauron in the last turn of GB game 94 with a 74 DS emis and here is the result:

Too bad you didn’t have a super-high challenge character to attempt it… But given that the “odds could not be calculated”, I doubt it mattered… LOL

Thanks Kim. That was interesting just to see the picture and to learn about the odds…

awesome, sounds like a dragon challenge however and I am wondering if he could be beat.

Do i think he can be beat???
Nope:eek:
If dropping the ring in the volcano is a victory condition, but slaying the boss isn’t, then i assume it can’t be done.

Do i think he can be beat???
Nope:eek:
If dropping the ring in the volcano is a victory condition, but slaying the boss isn’t, then i assume it can’t be done.

Adrian,
when dealing with Dragons and Maiar the odds can’t be calculated even if you know that you can win such as in Gunboat 97 when Mûrazôr (252ch rank) challenged and killed Gandalf(about 115ch rank) the text of it read as follows:

Challenge from Mûrazôr at 2315
In the Open Plains of 2315 a ritual duel began. A large circle was drawn in the parade grounds outside of the camp. As the residents of Echiant gathered around, Mûrazôr, a healthy nazgûl stepped forth and called challenge. In answer, Gandalf the Grey, a healthy and shining Maiar Spirit appeared! The odds could not be calculated by those watching. The fight began with both combatants uttering spells and incantations. Colored lights and energies of varied intensity surged around Gandalf the Grey and Mûrazôr. Suddenly, Mûrazôr called upon a mystical source and slew Gandalf the Grey with a spell of great power, but suffered no wounds.

Mûrazôr had a challenge rank of 252 at the time and two of the three M50 rings #12 and #13. If I remember correctly the same is said about Dragons when you challenge them.

Do you really think gandalf or a dragon is really comparable to the big dark dude??

Adrian,
Not at all, Sauron is one bad dude. He is the only NPC that kills freep army commanders when he runs into them. Whereas Gandalf and Galadriel will just disband DS armies leaving the commander alive. I was showing you about when the original programmers didn’t want you to know they used the “uncalculatable odds” and it is used for the Maiar and Dragons.

Having killed a number of dragons, I can’t seem to find any pdf’s with the example on it but lean towards the “odds could not be calculated” message showing (from vague memory). Of course, these odds have been calculestimated elsewhere, and it’s easy enough to get 1:1, but I would have to agree with Scavenger re the intent of the game designers most likely motivated by Fog of War/DITCOP type principles.

Anyone got a Dragon Challenge (or other famous character) pictures? I’d like to see them.

Clint,
I can’t find a picture but I did find this encounter message from one of my teams turns from a game a long time ago. FYI, Glorfindel had a 275 challenge and two artifacts that gave bonuses vs dragons. The spell learned was Conjure Hordes!

Encounter for Glorfindel at 2004
Drawing his weapons and calling upon his courage, he leapt to the attack with a battle scream rolling from his lips. Angurth looked sneeringly down at the warrior before him. It would be fun to slaughter this puny warrior, he thought. The Dragon watched as the warrior launched an all out attack against what he believed to be the Dragon’s weakest points. Suddenly, a fiery breath hit the warrior with stunning force. Giant talons spun him around and the whipping tail struck him again and again. Angurth laughed as his opponent fell to the ground gasping for breath and writhing in pain. Gathering his wits, he circled the great beast and struck a blow that caused the Dragon to roar in pain. Most of the blows seemed not to bother Angurth, but several hurt the great worm and his movements grew slower. It became a question of who would fall first. Suddenly, he lunged forward and struck Angurth through the chest and the great heart burst asunder. He watched in awe as the great body went through its death throes. After the battle, a small chest was found. Inside was a scroll which burst into flames. As it burned, he found a new spell in his memory! Gems and jewels were also found. They valued about 15000 gold pieces and were sent to the capital.

Scav, I guess it looked something like this? <g> Btw, I know there is a difference of opinion on this, but I prefer to kill dragons through the ReacEnc/Attack rather than via IssPers. Besides gold and lost list spells, the character would have a chance to live with 1 health point if he failed.

Has anyone tried to assassinate Sauron? In a game that I played, I had Tormog assassinate Gandalf, Radagahst and Gladerial.

If anyone is interested after such a long time, 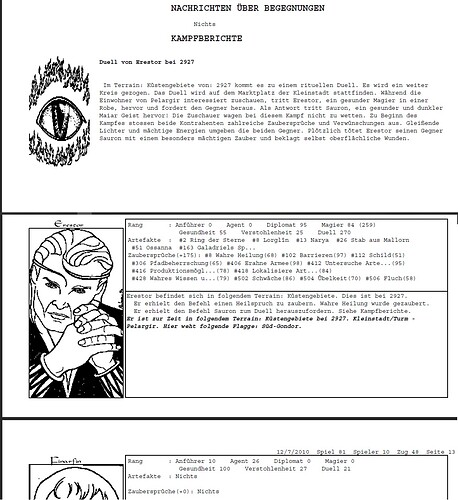 Sauron1149×1253 333 KB
I once was lucky meeting Sauron at the end of German GB game 81 where it doesn’t really matter anymore. Killed Sauron with a 275 challenge rank and had 55 health left.
1 Like