This game was set up by Jim Sparkes and Scott Baltes. Variants include:

A Regional Setup Map was provided by Jim’s team: 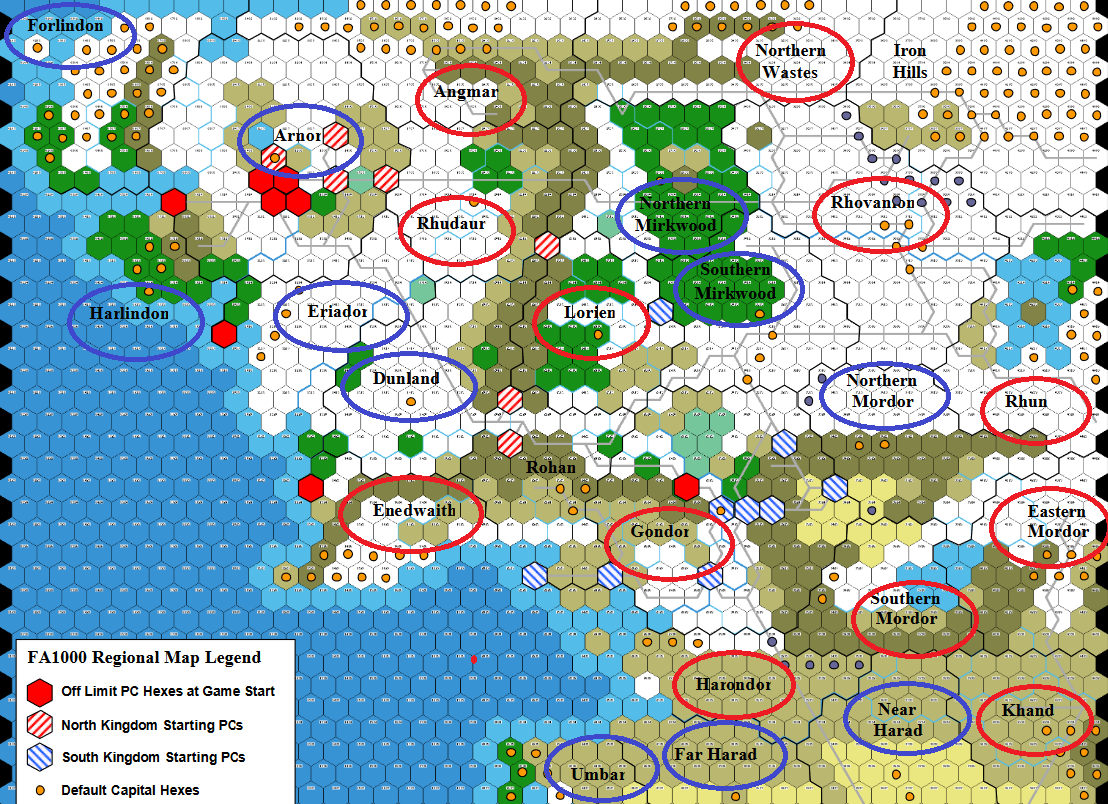 Turn 1 saw the two FP Dwarves in Mirkwood (?) launch their starting army at Lorien. But the FP surely saw that Rhudaur/Angmar/Wastes all sent their starting cav toward them. In the south, Harondor,SMordor, and SK actually made it south over the bridge with superior forces. Of course, Umbar went to the Havens. All of the action was going to be in Mirkwood and Harad. We saw some movement in the Gap, but nothing yet in Angmar/Rhudaur.

Turn 2 must have been a shock to the FP in Harad; we wiped out their army and leveled their Mtown/castle to the ground. The FP were also dismayed to fail Threatening Umbar, see more DS reinforcements cross the bridge, and new DS cav show up on the desert road toward Umbar. At the same time, the “Dwarves in Mirkwood” (DiM from now on!) blocked out the DS cav from the northwest and succeeded in crossing the Anduin. They were blocked out of Lorien, but the Gap movement described above ended up being the Enedwaith starting cav and it skirted Fangorn to encroach on Lorien. Furthermore, FP armies showed up in Fangorn (devoid of pcs) apparently “trolling” for Ents. I wonder what kind of bait the FP use to catch an Ent? Rhudaur blocks out the anticipated NK starting cav.

Turn 3 saw more FP from the Gap moving north through Fangorn. Lorien continues to block out DiM. DiM continues to block out DS armies from the north and now east. Even more troops cross the Harad bridge. Two DS armies make it to Near Harad’s capital. And now there’s going to be some action in Rhudaur. The victorious NK starting army is now joined by two other FP armies. We’re ‘blind’ in the West.

Orders for turn 4 sent off today.

One comment, or whine if you prefer…
Apparently, the FP started with the number for RoWind. They successfully cast LAT on turn 1, sent a character on turn 2 that found the encounter, then just investigated turn 3. We’ll see how long they keep it?

Will the DS ‘roll up’ the south?
Will the DiM be able to hold on until the western FP can rescue them?
Ents don’t like fire. What happens when the DS use their napalm?

Stay tuned for the next episode of “The blind and the DiM”.
Scott

We had a discussion last turn on whether or not DS would do a thing. You did the thing. My point was made.

I don’t see how you can chortle and brag so early in a game. But ok, i’ll throw in one comment:

I remind our gentle readers of Aesop’s fable of the tortoise and the hare. DS made a lot of sacrifices for early “punch”. Very hare-like.

Cut up the hare into joints or pieces, and set them aside on a plate; next, cut up two pounds of streaky bacon into square pieces the size of walnuts, and fry these in a stewpan; then add the pieces of hare, and fry those also with the bacon; add a handful of mushrooms, two bay-leaves, some thyme, basil and winter savory, two cloves of garlic, twenty cloves, three blades of mace, a teaspoonful of black peppercorns, a tablespoonful of salt, a pint of madeira, and a pinch of cayenne; put the lid on, and set all this to simmer very gently in the oven for an hour and a half. The hare must then be strained from its liquor; all the meat is to be removed from the bones, chopped, pounded; all the grease and bacon added and pounded again’ into a smooth pulp, and then rubbed through a wire sieve on to a dish, and afterwards put into a large kitchen-pan, to be mixed up with . the liquor from the hare. If the liquor or stock from the hare measures more than a pint, it should be boiled down to that quantity, and about four ounces of good glaze should be added. Fill some ordinary preserving pie-pans with the preparation, cover them over with common flour-and-water paste, set the pans thus far prepared in deep sautapans, or baking-sheets with a little water at the bottom; and put them to bake in an oven of moderate heat for about one hour; they must then be taken out, the meat pressed down level with a spoon; some clarified butter or lard poured over the top in sufficient quantity to cover in the meat; and as soon as they are become cold, let the pans be covered over with strong white papers moistened on one side with whites of egg; and when perfectly dry, oil the surface of the paper over with a brush, and put the potted hare in a very cool place, to be kept for use, as occasion requires.

ah, the many mysteries of grudge matches…

So far it’s quite a good match I think! We are all enjoying it. Hope DS team is as well.